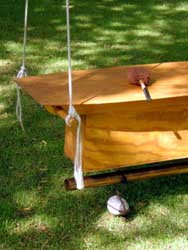 You lay down on a 1.80 meter long board, on the underside are fan-like resonators made of wood A second one gently rocks back and forth, striking a copper bass tube anchored to the floor under the cradle and lingering for about 2½ minutes after a stop. Whenever the cradle slides over the tube bell, the sound is amplified and felt throughout the body  lying on the cradle. It hangs from a two-meter-high iron stand and can be gently moved back and forth in the transverse direction.
In the same form it is also available as resonance swing. It is suspended in a tree 4-5 meters high. 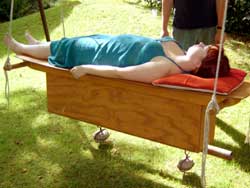 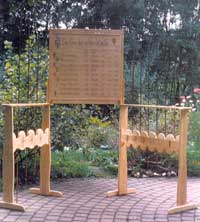 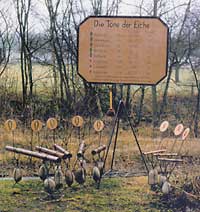 Do we experience what we perceive as beautiful with the eye, as well as harmoniously with the ear? This question appears again and again in human history. Leonardo da Vinci, for example, studied the proportions of the human body and found that they correspond to integer ratios and intervals of sound. I am now dealing with the harmonic investigation of plant proportions (previously in the case of oak, summer linden, dewberry, vetchling and real chamomile). I took measurements on leaves, flowers, fruits and other typical plant traits and calculated the sound over the wavelengths that corresponded to these measures. Then I tuned the calculated tones in the form of tubular bells or metal harps on the cent exactly, so that it is possible to make the notes of the style oak, summer bark, etc. sound.

Surprisingly, all previous plant settings show that nature strives for harmony, that is, for integer ratios. At the given intervals of the chamomile, the maximum deviation is 9 cents, which is less than a tenth of a semitone.

The human voice is hereby visible. On a black drum membrane of 60 cm diameter quartz sand is scattered. The membrane is scanned with a strong tone through a cardboard tube, which lays the sand in beautiful organic-looking forms. Deep sounds produce simple, clear images. The higher the tones, the more complicated the structures become.

A copper plate, which can have different shapes, is screwed horizontally on a foot of iron. The plate is sprinkled with quartz sand and played with a violin bow. Depending on which overtone sounds different aesthetic forms emerge. The vibration behavior of the plate becomes visible. 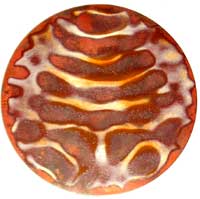 Sand and enamel paint on patinated cupper or glass

No brush and no spatula were the tools for these pictures. They were not created by conventional means, but with the help of a violin bow. Copper or glass plates are sprinkled with sand and enamel powder and played with a violin bow. The sound that emerges paints the picture itself. In a matter of seconds, depending on the tone, new, fascinating structures are created again and again.When heated in the oven, the enamel powder melts and combines with sand and metal – the sound image solidifies.

When we look at an object, our eyes usually stick to the surface. If we look at a cup, for example, we can assume that it is made of porcelain. But we are not really sure, because it could also be made of plastic and painted the same. Only when we knock against the cup, certainty arises. Our ears are like x-ray eyes. When something sounds, we listen to the inner nature of the sound generator. In the sound images, something of the interior of the copper plates swings outward and becomes visible on its surface. So you will not be forced to paint a strange picture with brush and paint, but your very own picture reveals itself. 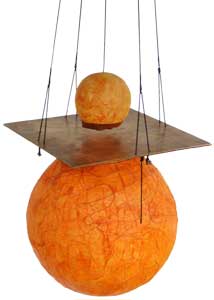 A sound object for all senses

Spherical resonators made of tissue paper enhance the sound of the bronze plate bell. The large lower one amplifies the low fundamental tone, the smaller one diverse overtones. When the little paper container moves back and forth, the sound becomes strangely elastic, because sometimes the other overtone is amplified. When you touch these hollow bodies, the sound is noticeable. A candle in the lower resonator generates warm light and warms the sound plate.